You are here: Home / Home Improvement / The Many Uses for a Black Light Flashlight 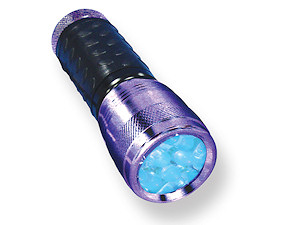 A black light flashlight does not literally emit “black light”, but rather produces a narrow spectral band of ultraviolet light on the edge of the visible spectrum. The visible spectrum is the range of light visible to human eyes. A black light flashlight appear to emit a weak, dark purplish light, but as anyone who has ever seen the bright glow of a black light poster light up in a room with an ultraviolet light source, a black light can be a pretty strong source of light. It is just that our human eyes cannot see most of it.

Here are some of the most popular uses for black light flashlights.

Pet stains can be hard to find. Your nose can smell them, but your eyes frequently cannot find the stains once they dry on carpeting or furniture. However, urine, vomit, feces residue and other biological stains do fluoresce, or glow, under ultraviolet light. Just darken a room where your nose indicates you will find pet stains and use an black light LED flashlight with at least 12 ultraviolet LEDs. Any biological stains left on carpeting or furniture will glow. You can also use a black light LED cap light to find stains, but you may have to get closer to the stains before they start to glow. Sometimes it is good to use both because once a stain is located, you can see the stain while you work to remove it with soap and water. If the soap and water does not remove the odor, try pouring some white vinegar on the stain.

If you travel a lot, a black light flashlight is an invaluable tool for checking to see if the hotel is changing sheets and other bedding. It can also be used to check bathrooms and sinks for cleanliness. Hotels are increasingly being managed and cleaned by people who were born in other countries and were not raised with the same health standards, or who may be trying to save money by skimping on cleaning. Almost any visible or invisible biological stain will glow under ultraviolet light. This includes urine, semen, body oils, saliva, soda pop, beer and wine. Just close the drapes, turn out the lights, and scan the room with an ultraviolet flashlight. If you find any glowing stains on the sheets, pillow cases or bed comforter, my recommendation would be to call the front desk and demand that they change the bedding.

The US government has been taking steps to make their currency increasingly difficult to counterfeit. Making it easier detecting counterfeit currency is part of this. Since 1996, all US $5, $10, $20, $50 and $100 bills produced have an embedded security strip that can be seen when the bill is held up to the light. The strip includes embedded text that indicated the denomination of the currency. That strip is also designed to glow under ultraviolet light and the strip in each denomination glows a different color.

This is a favorite use for people living in areas where scorpions are found. Scorpions are night critters that glow under black light. They are very hard to spot with a regular flashlight, but easy to identify with ultraviolet light. We do live in scorpion country and frequently rid our yard of scorpions by hunting them at night using both an ultraviolet flashlight and a back light LED cap light.