You are here: Home / Cooking / How To Make S’Mores

Making s’mores is simple and they make a very tasty snack. S’mores are generally considered to be a snack to make around a camp fire, but they can be made just as easily over a charcoal grill.

S’mores are believed to have been developed as a camping recipe in the early part of the 20th century. The person who came up with the idea is unknown, but it is assumed that someone was toasting marshmallows over a camp fire and used used two pieces of graham cracker to keep from burning their fingers. The chocolate was added because it goes so well with marshmallows. The first published recipe for s’mores showed up in the 1927 Girl Scout Handbook and it became a camping tradition. The name s’more is likely a contraction of “some more”, which is just what you want after you taste the first one.

You will need the large, puffy type of marshmallows. A bar of Hershey’s Milk Chocolate is traditionally used when making s’mores, but any type of flat chocolate bar will work. 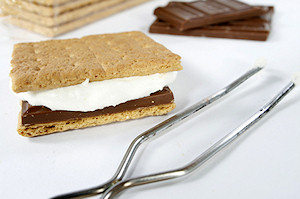 There are many variations of s’mores. We have tried them with a glob of peanut butter on one of the graham crackers and also with Hershey’s Dark Chocolate as a substitute for Milk Chocolate. Try any variations that you think will work well. Enjoy. 😀